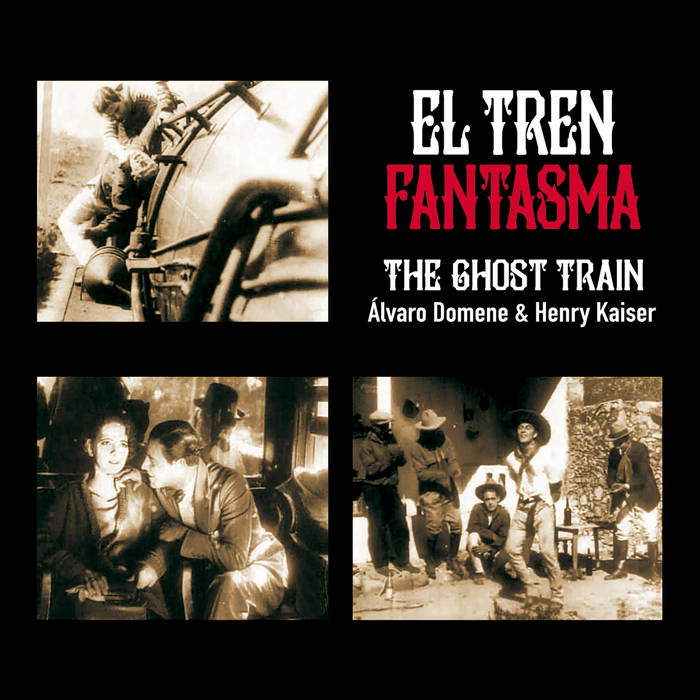 "If you like to have your mind blown, then you really should check out this disc" - Bruce Gallanter, Downtown Music Gallery (NYC)

"Despite its minimalist conception and impressive length, there is no shortage of ideas flowing through El tren fantasma, from start to finish. The two guitarists are spearheading the current music boundaries and are at the top of their art. It’s majestic to hear their collaborative guided improvisation here." Dave Tremblay (Can This Even Be Called Music?)

A Classic Railroad Western tale produced in Mexico in 1927, El Tren Fantasma (The Ghost Train) is one of the most exciting and fun Mexican silent films. An action film and a love triangle, the story follows our hero, Adolfo Mariel (Mexican screen idol Carlos Villatoro) as a railroad engineer sent to investigate a series of robberies and accidents along the railway’s El Ferrocarril Mexicano line. He meets and falls for the station master’s pretty daughter, Elena del Bosque (Clarita Ibáñez), but must fight for her against a complicated bandit Paco Mendoza (Manuel de los Ríos).

The film was directed by Mexican film pioneer Gabriel García Moreno, who established an entire studio outside the city of Orizaba, where El Tren Fantasma is set. García Moreno had his actors perform all their own stunts, which combined with the beautiful location photography and García Moreno’s own documentary filmmaking background gives the film an incredible sense of realism mixed with a lyrical style. Hoping to make the film a crossover success, García Moreno had the inter-titles printed in both Spanish and English, but the dominance of Hollywood and European cinema in the 1920s meant that the film has been rarely screened outside Mexico.

Álvaro Domene and Henry Kaiser have created an acoustic guitar duet for this film, which can be found here:

The second track on this CD is a condensed version of that 71 minute soundtrack, and the two electric duets here are inspired by the film, as a separate thing from the all-acoustic soundtrack.

Recorded by Henry Kaiser in Santa Cruz, California, in February of 2019.
The acoustic guitar duet was recorded by Sandor Nagyszalanczy.

Artwork and design by Brandy Gale.

"Thanks to John Monteleone for the two amazing Radio Flyer archtops." - Henry Kaiser