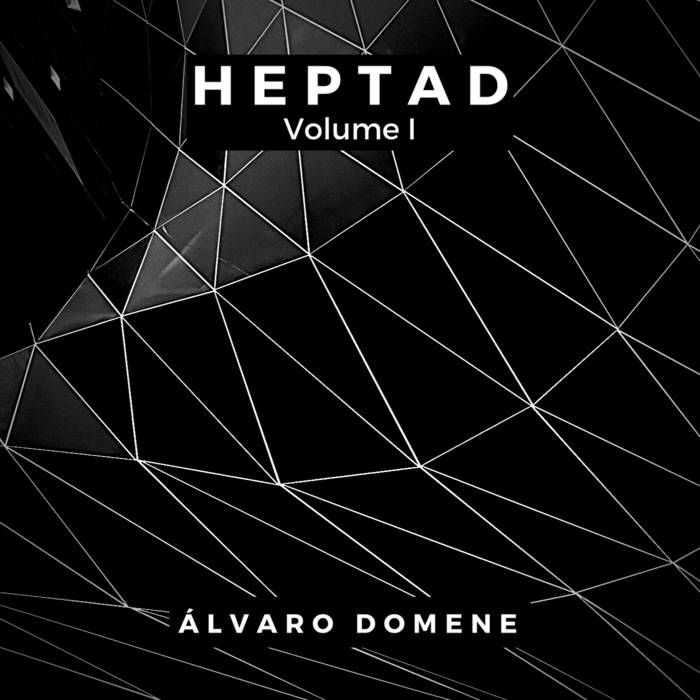 LCSW The musicianship and disruptive way that Alvaro expreses through music is food for our rotten lockdowned souls. Favorite track: Where The Universe Is Set On Cold Fire.

"Heptad is stunning! Vivid, rich in sound and emotion, and packed with ideas." - Elliott Sharp

“‘Heptad: Volume 1’ captures Álvaro in real-time performance mode. As he describes it, the pieces are composed and notated and then spontaneously interpreted for this album. All processing happens in the moment, with custom-programmed pitch delay algorithms that influence the final output. Its seven pieces reflect a diversity of approaches. Pulsing, percussive, ambient, ethereal, disquieting and lacerating are just a handful of words that reflect what you’ll hear.” – Anil Prasad (Innerviews.org)

"Domene’s latest solo effort retains the extended range of his 7-string electric but favors a cleaner sound than usual. Also retained is his excellent sense of dynamics and compositional arc." - Michael Ross (guitarmoderne.com)

"The second track "Attrition" is a great example of this during its nine-minute run. Essentially a suite, the track begins with a pulsating drive and sparkling reversed envelopes of sound, a pause leads to a more atmospheric second with spacious ringing tones and interesting counter motions, which split multi-directionally, but at times coalesce into driving rhythmic figures. Another track, 'Where The Universe Is Set On Cold Fire' sounds like a self-aware Theremin singing of a broken heart.
Fascinating. The album is replete with inventiveness. Bring on Vol 2!" - Paul Acquaro (freejazzblog.org)

Heptad is the first volume of Domene’s new works for seven string electric guitar which, instead of being a continuation of his monolithic sounding solo pieces heard on Illustris (2020) (ilusorecords.bandcamp.com/album/illustris) and The Compass (2018) (ilusorecords.bandcamp.com/album/the-compass), it signifies a tangent in Domene’s solo works. If the two previous albums were conceptualized as new orchestral-inspired music performed on electric guitar, Heptad is the chamber equivalent, on which Domene’s seven notated, but spontaneously interpreted pieces, evoke the enveloping sonorities of small string ensembles.

All the pieces were conceived to be performed and recorded live, with no overdubs, and, to achieve this imaginative sound, Domene meticulously programmed over two dozen pitch delay algorithms that assisted him in shaping the harmonic and melodic palette of each compositional framework, which, along with his angular approach on guitar and dazzling energy, allowed him to weave nets of contrapuntal statements, eerie chordal textures, and chilling harmonics.

Heptad Volume I is a serious solo guitar recording, pivotal in Domene’s solo output, and presented with all the meticulousness and imagination that these exploratory and unearthly pieces deserve.

Recorded and mixed by Domene on different sessions between November 2020 and January 2021 at Singularity Studio, Kingston (New York).