Live at Singularity Music Series I 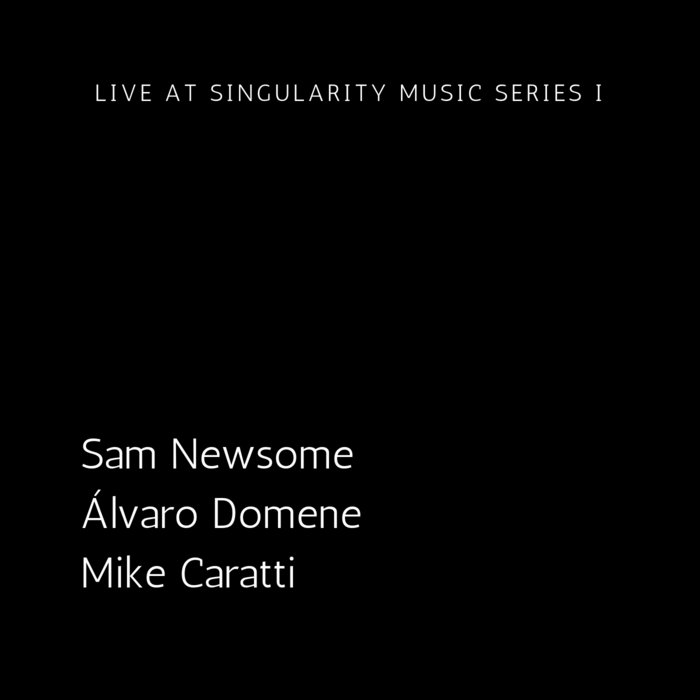 Newsome began the concert with a stunning prepared solo soprano piece incorporating wind chimes, balloons and hand percussion. Circular breathing and real time wide-panning techniques propelled his deeply moving and intense performance. He was joined by Domene and Caratti whose trio performance bubbled with energy and enthusiasm. From bluesy grooves to screeching altissimo scraping, the trio displayed their wide range of musical backgrounds while remaining cohesively rooted in the jazz and free improvisation traditions.

SAM NEWSOME
"Newsome expands the sound of a single soprano into a one-man band." - Mark Corroto, All About Jazz

Sam Newsome is a soprano saxophone specialist. Since making the soprano his main instrument almost 20 years ago, he has established himself as one of the more important soprano players of his generation. In addition to being selected as a 2016 NYFA Fellow, Newsome has been nominated by the Jazz Journalist Association (JJA) as “Soprano Saxophonist of Year,” several years in a row, and has consistently placed in the top 10 in the Downbeat Critics Poll in the “Soprano Saxophone” category.​​ Newsome is also a frequent collaborator with many creative musicians on the New York jazz scene: Pepperland (​with pianist Ethan Iverson and choreographer Mark Morris), drummer Francisco Mora Catlett and AfroHORN, Andrew Cyrille/Sam Newsome Duo, Fay Victor and SoundNoise Funk, Angelica Sanchez, Jean-Michel Pilc, ​and Meg Okura and her Pan Asian Chamber Jazz Ensemble.

MIKE CARATTI
"Caratti works in a thoughtful, solicitous manner. Just when you think he is going to zig, he zags." - Mark Corroto, All About Jazz

Caratti is a musician of boundless energy and ever-exciting creative impulse. His compositional approach crosses the worlds of contemporary classical music, avant-garde jazz and noise metal, drawing equal inspiration from Scelsi and Slayer. Caratti leads the acclaimed bands dMu, whose album Synaptic Self (2016) made the Avant Music News Best Albums of 2016 list and Death Drag, whose album Shifted (2018) was recognised as the best avant-garde jazz album of 2018 by Heavy Blog Is Heavy. Caratti is a prolific contributor to the Australian improvised music scene, he has performed throughout the world and worked with Steve Beresford, Elliott Sharp, Josh Sinton, Rachel Musson, Colin Marston, Lucas ‘Granpa’ Abela and many others.

All music composed by Sam Newsome (Some New Music BMI), Álvaro Domene (Dometone Music BMI), and Mike Caratti, except Track 1 and 5, by Newsome.