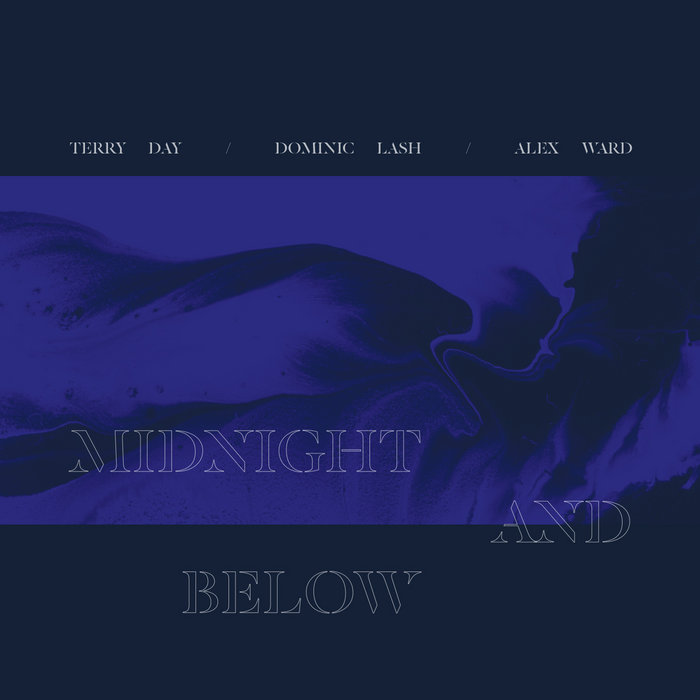 Midnight and Below is a stunning studio recording of freely improvised / spontaneously composed music by an inter-generational trio of the most revered names in the UK / European free music world; Terry Day (drums), Dominic Lash (double bass) and Alex Ward (guitar and clarinet).

Terry Day is a first generation pioneer of improvisation, free jazz & experimental music. He is an improviser, multi-instrumentalist, lyricist, songwriter, visual artist and poet. In the early 1960s Terry played drums in Kilburn & the Highroads, a band led by Ian Dury and also the Russell Hardy Trio who were perhaps the first UK based group committed solely to the performance of freely improvised music. In the late 1960s Day formed a duo with Derek Bailey and was a regular member of The Continuous Music Ensemble, later known as The People Band. Since then he has collaborated with musicians and artists from around the world and spanning multiple musical and artistic idioms including Mike Figgis, George Kahn, John Stevens, Trevor Watts, David Toop, Steve Beresford, Evan Parker, Han Bennink, Lol Coxhill, John Russell, Elliot Sharp, Arto Lindsey and Blanca Regina amongst many others. The biographical film ‘Unpredictable’ (2015), directed by Blanca Regina, depicts the life and art of Terry.

Contrabassist Dominic Lash is one of the leading figures on the UK/European new music scene. Since emerging from the Oxford Improvisers collective, Lash’s musical career has seen him evolve into one of the UK’s most prolific and acclaimed musicians, having performed with the likes of Evan Parker, Tony Conrad, Tony Buck (the Necks), Joe Morris and the late Steve Reid. His current projects include The Dominic Lash Quartet, The Set Ensemble (an experimental music group focused on the work of the Wandelweiser collective) and duos with Seth Cooke and Angharad Davies.

Alex Ward’s involvement in freely improvised music dates back to 1986 when he first met Derek Bailey. Ward is today undoubtedly one of the most innovative and distinctive voices in new creative music. His discography is immense and performance schedule hectic. His current ensembles include Forebrace, The Alex Ward Quintet/Sextet and Items 4 & 10. He has been a member of many other groups including ensembles led by Eugene Chadbourne, Simon H. Fell and Duck Baker and he has performed and recorded with the world’s leading voices in creative music.

These three iconic voices join forces to bring Midnight and Below, an album of five spontaneously composed and performed pieces impeccably recorded at the studios of the London School of Sound in November 2015. From the haunting lineal eeriness of Bathyal, the scurrying interplay and interloping grooves of Abyssal through to the intricately detailed and spatial introduction to Phytobenthos, which builds and bubbles to its heightened climax. Each piece on the album brilliantly conjures the vast depth and mystery of its oceanic-themed title. Every detailed nuance of this enthralling session is captured in this stunning recording. Brimming with energy and a deeply communicative magnetism, the album is an outstanding release of the finest brand of freely improvised music.

Mixed and mastered by Alex Ward