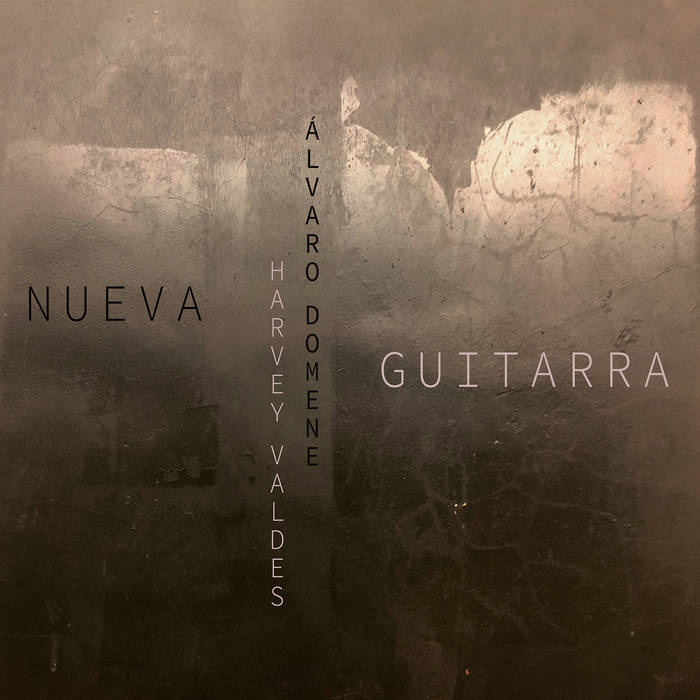 Giles An endless variety of guitar wizardry - noisy and shreddy one moment, epic and atmospheric the next, even has its catchy and funky moments. And the tracks have a beautiful sense of structure amongst the chaos: this is far more than just aimless noodling but always taking you somewhere unexpected. Favorite track: The Sophist Pundit.

Nueva Guitarra is not designed for the faint of heart and that’s a very good thing.

The duo make their uncompromising and delightfully madcap intentions known in the album opener, “A Crooked Odyssey.”  It’s a sonic assault of tapping, looping, glissandos, drones, whammy dives and frizzled corrupted guitar signalry, a mad ride to the mountain top that only let’s up with a soothing ambient cloud appearing in the last 45 seconds of the six-minute outing.

The best place to start your listening might be with the two solo pieces, which showcase the players’ varied approaches and signature sounds.

Valdes’ “Zealous Reflections” is a chord and melody exploration, with close voiced dissonances alternating with pleasant resolutions that he lets ring out. “Biomimicry” is Álvaro Domene swinging for the fences. It’s all quicksilver, speeded up melodies over noisy pads, loops and thumps, over under upside down signals, otherworldly whammy bar and harmonizer torture.  A noise jazz industrial racket of the highest order, from the bastard son of Buckethead and Albert Ayler.

My personal favorites, and maybe the easiest for the noise jazz newbie to dip into, are “Lady Dog Night Terror” and the album closer, “The Sophist Pundit.”

“Lady Dog Night Terror” emerges quietly from the darkness.  Its deep warm volume swells from Domene’s rise to surround and complement Valdes’ clean chording and single note lines.  Slowly, the dissonance in the melody and backdrop increases.  It gets symphonic and fuzz laden, then slowly slips away just after the four minute mark.

With “The Sophist Pundit,” the duo saved the best for last. This is a summary statement of all the ideas set before, spread over nearly nine and a half minutes of guitar hellacious.

The track begins with stutter stop phrases looped to create a variable pulse, over which the duo improvise jagged lines.  It just gets more intense as it goes on, with the duo creating a wall of feedback looped upon feedback, punctured by siren calls and squeals designed to melt your preconceived notions of what guitars can do.

All musicians have been hit by COVID-19, but not many have as hard as Domene.  He battled the ailment all through the spring, but still managed to ready this and other collections for release.

If you want to do a good deed for music kind, and vastly widen your own appreciation of music and the creative possibilities still left in the guitar, download this uncompromising disc." - Sal Cataldi (NYSMusic.com)

"I heard of Álvaro Domene sometime in 2015. I loved his intense, surprising, in-your-face sound and the depth of his musicality. I knew I had to get together with this dude and do some playing!

A session soon happened, and we instantly hit it off with our love of both heavy music and free improv. Over the years, we played a few more sessions and would make an effort to catch each other’s shows. Then, Álvaro invited me to play solo for his Singularity series in Kingston (New York). We’d always find ourselves saying, “Man, we gotta record something one day!” Fast forward to January 16, 2020 when our schedules finally aligned.

Álvaro initiated our creative collaboration by sharing a few of his compositions of two measure cells. They were contrapuntal, atonal, and really interesting. I was excited to dig in, to say the least!

I have been getting into photography for a couple of years, and I thought some of my photos would be fun to use as graphic scores. I shoot abstract, environmental images and the impulse to capture them is similar to improvisation in music - like excavating and capturing an intangible idea.

So, with Álvaro’s compositions, my photos, and some free playing, we have a record: duo, two headless guitars, two loud amps, an army of effects, and audio wizard engineer, Dane Johnson behind the board. I’m thrilled to release this record into the world, enjoyed making it with my badass friend, and look forward to our next musical meeting. Play it loud and enjoy!" - Harvey Valdes, April 2020.

“I am mesmerized by the remarkable depth existing in Harvey’s music. His approach to solo guitar is superb, and I find myself constantly inspired by his focused sound and the ingenious intricacies and elegance of his harmonic choices and counterpoint lines. On his solo work, he has managed to synthesise and reconfigure the vast traditions of jazz and classical guitar to generate a unique and inventive new path by which, I am sure, numerous guitarists will be influenced in the future.

I’m delighted and grateful that we got the chance to work on this album together and feel proud of the results. We both have similar backgrounds and aesthetic preferences, and I truly believe that the coalescence of these sonorities that we both love (from contemporary composition, through modern jazz, to the dark and intense atmospheres of metal music) was indeed successful.

I invite you to grab a download, crank it up, and enjoy the mind-altering sonic landscape that we captured on Nueva Guitarra.” - Álvaro Domene, April 2020.

All music composed by Harvey Valdes and Álvaro Domene.

Photograph and layout by Harvey Valdes.