The Sword Still Hangs Upon The Wall 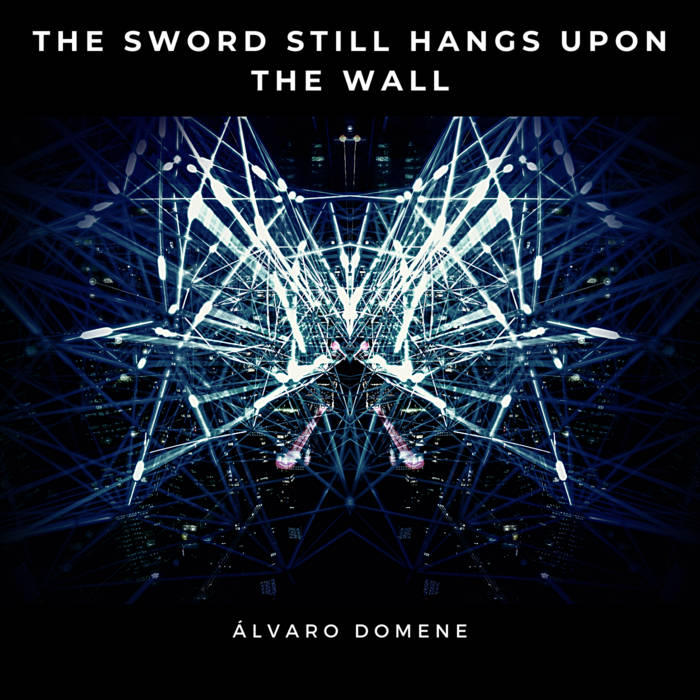 
"We might well ask upon whose wall this sword hangs, this sword Álvaro Domene testifies to in his music. It is a simple comparison to link the guitar and the sword and to ask which bodies and minds might be set free by each. Both are part of a techne that captures vectors and arcs which force-multiply through other systems- separating them, clarifying them. Domene’s sound sculptures pose questions of emotion, spirit, intellect, the cosmos- and in the end, these questions of sound invite us to act in some way. The sword hangs upon all our walls and in ringing metal it leads to one destination in unison. A ‘land of song’, puissance, voices raised in glorious clamor. In unison against a falling power. ‘This machine ends all fascism.’

Domene’s work on this album explores the outer limits of engagement with the instrument itself and is in dialog with a broader milieu of guitarists who operate in the New York orbit and beyond. He deploys a galactic array of forms that include jazz, various species of metal, palettes of sonic texture from inside and outside the instrument’s techniques, experimental guitar which we can trace emerging in part from the 70s NYC downtown scene [and in Alvaro’s other collaborations with a key protagonist in that NYC scene, the magister ludi Elliott Sharp]. Domene joins a project which has been underway for many decades and accelerates it forward.

There is an underlying engagement both across the music and in his thinking. Beyond transport through joy, intricate formal unfoldings, ecstasy: how can sound take on a set of ethical, moral and political responsibilities? Perhaps by an openness to pure chance in the midst of an articulate structure; a commitment to texture, timbre; a set of extended techniques conjuring vast spaces dancing through the boundaries of carefully programmed delay matrices. Across and beyond a terrain of post-minimalism and the aesthetic positions minimalism held, Domene’s work jumps epochs, fusing myriad styles and an epic, almost symphonic form with his personal vocabulary of guitar. It exists in a tension between the given and the discovered, a structure and the evolving patterns and living sound. Like the scintillation of life itself.

And in this life-sound a core is revealed. Electromagnetic flux wrings it out, flattens it, folds it back upon itself. Layer upon layer rewrought. A core capture, a heat birth, an edge a molecule wide and a parsec long arcs out across our system. Information cascades, swarms again, dancing blades warding off the energy. Bow shock. A bubble. Inside, the denser matter becomes an encoding system.  A position. A gesture, a supplication. The bubble grows. The bubble is gone, and we float in emptiness. Silence. The dark. And then a sudden light. All flows down. The roots of the ash tree. Æ. Star food, light, blood. The leaves burst forth.
Fiat Lux.


The Sword Still Hangs Upon the Wall
Cascading ice in nacreous, luminescent sunlight. Light from an evening star, a falling star.
A Great Filter. A transmission. A halo of refractions, crystal revelation, sound writ large on the skies. Crumbling, smoldering. A thousand arms thrown up, swarming, to block the heat and light. Time lost; Starless we coast as the future wraps around us. Lensed unto the end. The end of all things. The end of all. Things themselves. The core again. Mother. Core resistance. Uplift against a fallen angel. A slight wingbeat, a feather in the void.

Moving Beyond the Misnomer of Chaos
A falls falling, as the falls falling. A hand grasping at signals. A wave, a wave. Metallic foam on the crest, a wave of liquid light. In the deeps, the refrain holds. A shadow casts its own diamond shadow. The waves race across themselves. The abyssal. Crystals tumbling down the slope, free fall into darkness.

Albatera
A saccade across the surface of the sun. Time compression. Stutter, We. Why, the below, the above, the hum sawtoothed upon itself. Iridescence, putrefaction, rebirth. The core returns. I, Thou. We. The saw-edge. Force. I turn to face the sun. My eyes run black. Seeing within sight, I see again. I turn to myself. My eyes run white. A swarm, an arc, a blade against the plasma saws. Devour all. Kali, your arms swarm. Your foot holds the enemy. Darkest mother, your necklace. Fire.  I, Thou. We. Our water on the barkless branch. Only faith. Only faith for life. ‘Love is the law, love under will.’

The Veriest Delusion
A walk forward and backward. A falling, falls falling. The transmission again, a deep rumble below. A whirling. Hands blur. A thread of blood through the depths. The geometry of the phrase is liquefied. A bell in motion. The clay. The ore. The furnace cold. The bell cools. The bell’s architecture flows. Time. The crack. A liquid whistle, a hum.


Unsheathed Again
Axiom. Echo. A Law. The waves intersect. Axiom. Echo. A desert fire, a wind, a tornado, a whirlwind lifting dust. Explosion of the forward wave. Dust in our eyes, the wave behind. A river of glittering dust. A flame upheld. A core breach. A pressure inversion. The dust scatters. Wings afire, we hold the cup high. Dust. On fire. Dust whirling in glittering flame. A pillar of gold in the conflagration. Unity. Echo. A Law. A body laying in the desert snow. An eye slowly blinks. The cave. The bell.

"Remind them that the sword still hangs upon the wall and the heart still beats within the man, and that that sword will be unsheathed again, if necessary, in defense of your rights. Give them to understand that you will not stand patiently by and see your hard earnings squandered by a luxuriating class of idlers. If the American manhood will arouse itself and speak to those fellows in plain language, not to be misunderstood, they can save themselves, their country and their children, from the fate of poverty which awaits them. Will you do it?" - Lucy Parsons ("Americans! Arouse Yourselves!" 1905)