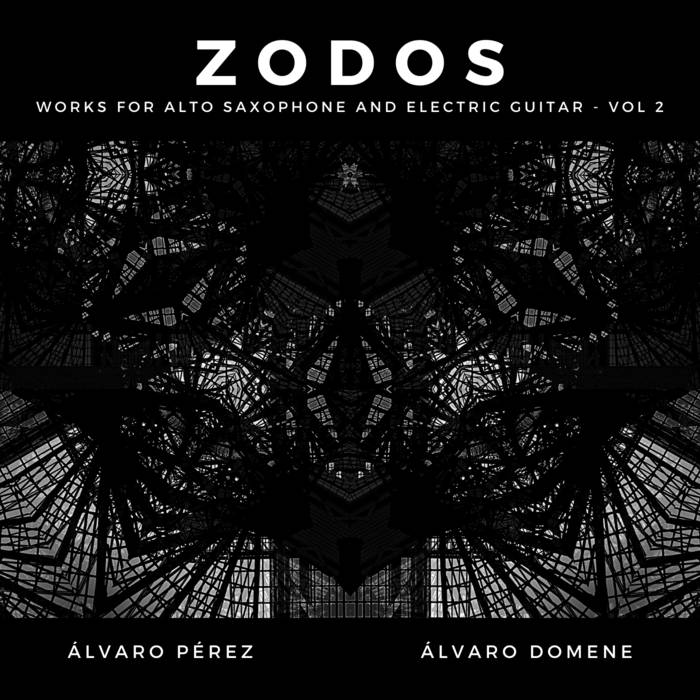 On “Zodos Vol.2”, Madrid based alto saxophonist-composer Álvaro Pérez and New York based guitarist-composer Álvaro Domene present six new original pieces of exploratory creative music for alto saxophone and seven string electric guitar which delve into and beyond the wide spectrum of functions and textures that these two instruments can adopt individually and with each other.

On this second volume, their chamber-like compositional structures feature faster tempi, hockets, and elements of unison, both rhythmic and melodic, which take priority in place of the more abstract and textural passages from the first release.

The duo brings virtuosity to the sensitive requirements of this remarkably labyrinthine music, which calls for deep instrumental dexterity and an acute awareness for leveling out all of the components of their language to generate a singular aural result that, often times, feels as if it had a three-dimensional tactile element to it.

The six pieces that form the second volume of "Zodos" reveal two performers in peak form, each of whom displays his abilities to the fullest, at the vanguard of repertoire development for this particular instrumentation.

* In case you missed it, make sure you listen to the first volume, as well: ilusorecords.bandcamp.com/album/zodos

"Zodos, the Domene-Pérez duo, make magical music, and crazy math where one plus one equals the borders of the soulful infinite. Each an original and accomplished virtuoso on their instruments, they meet in a zone of deep listening that, while grounded in the traditions of the avant garde (both classical and jazz) offers a transcendent vision."
- David Gonzalez (Lifetime Achievement Award - International Performing Arts for Youth, Drama Desk Nominee, Doctor of Music Therapy)

All music by Álvaro Domene and Álvaro Pérez.